If I get chance I just love a leisurely mooch around our local car boot for items, mainly things that relate to my interests, local history, but in particular, since having discovered Weymouth’s military past, I’ve become fascinated by life in town for the regular Tommy.

Sometimes I come away from my Sunday perambulations empty handed, but other times I strike lucky.

Well, this morning was one of those days.

My eyes lit up when I spotted my favourite seller was on site with his stash of old books. Boxes and boxes of them! An Aladdin’s Cave to a bookaholic like myself. Luckily hubby bumped into a golfing buddy just as he was about to grumble in a vain attempt at stopping me from filling his car with ‘musty old rubbish!’

Today’s star find was a 1915-16 edition of Boys Own.  Of course its wartime contents followed a hard line patriotic slant.  Like most young boys of that era, they were only too willing to emulate their elders, particularly heroic soldiers and sailors. This children’s book’s contents reflected that with its patriotic tales and articles.

All this knowledge for £1! 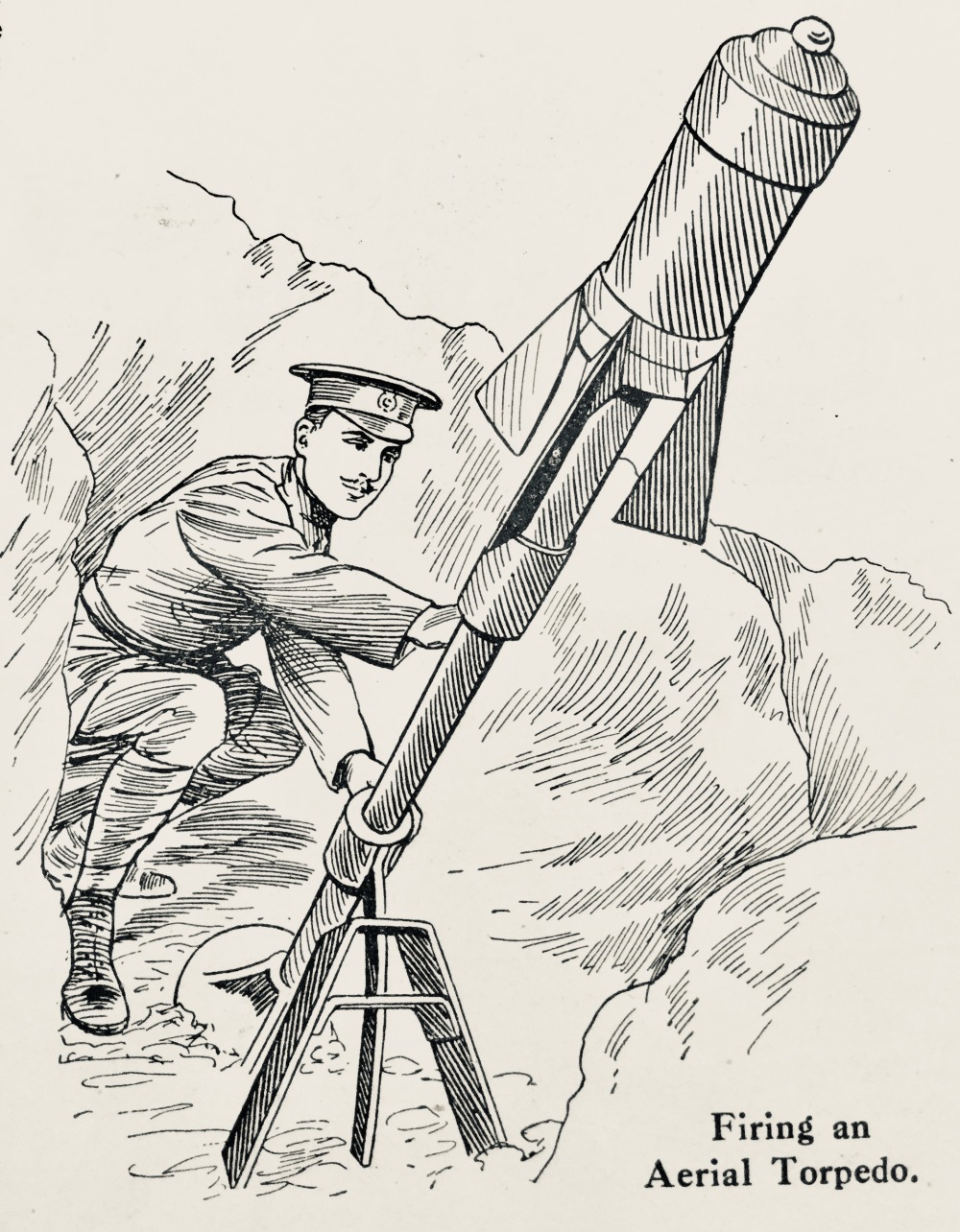 Trench warfare as developed in modern fighting is responsible for the introduction of the aerial torpedo. Time after time, recent dispatches from the Front have recorded such news as

“ There continues to be active mine combats and interchange of bombs and aerial torpedos from trench to trench.”

The aerial torpedo is not intended for projecting to any considerable distance, but it carries a big charge of explosive, and its bursting power and radius of destruction are great. In addition to killing merit is exceedingly efficient in demolishing trenches; the displacement of earth caused by the explosion of one of these big projectiles is often sufficient to completely fill in one one section of a trench, thus cutting off communication with those who are in that part of the trench. The moral effect of these flying bombs counts for much; troops in the trenches dislike them fervently, for they are bad shattered of nerves.

Here is a little pen picture from between the lines on the British Front that yields a graphic description of this missile. “Salvoes of aerial torpedoes were fired,” wrote an English war-correspondent, “which were so close to us that we thought we could see them lolloping through the blue sky and bursting among the dishevelled trees about the enemies trenches.

If noise could kill, the Germans there would be stone dead. These flying torpedoes explode with a splitting, cracking violence that puts one’s brain to the rack and stretches it taut with cruel duration.”

Yet, with his usual jocularity, Tommy Atkins dubs them “pillar-boxes.”!

Flitting through this wartime boys annual, the language used (such as ‘killing merit’)  within its articles made me wonder if todays children’s magazines would be quite so graphic in the same circumstances.

I also did a search on aerial torpedos, a term unknown to me, which muddied waters somewhat, as nowadays most references to them nowadays only mention missiles launched from planes, air ships or sea going vessels, such as those used in early WWI zeppelin air raids on British soil.

Very little is mentioned of those used trench to trench.

Returning to my favoured method of research, the good old British Newspapers online,  I found plenty of references to them during the 1915-1917 period, which confirmed my suspicions that it’s the terminology that has since changed, as those trench to trench missiles were, and would subsequently, be referred to as finned mortars, these fins earning it’s early name as a torpedo.

Below an image of these weapons being manufactured in France 1917.

It was interesting that some of the articles were also written to debunk myths that these dreaded missiles could fly in multi directions, making them far more worrying and deadly in the public’s eyes than bombs that simply rained down from the skies.

Little could they realise that in future warfare, missiles could be launched and guided with millimetre precision to their destination from behind a far removed remote screen.

Strike Terror into the Hearts of the German Soldiers

Karl von Wiegand, the Berlin correspondent of the “New York World,” records the impressions of a German lieutenant of what the officer calls an “aerial torpedo” fired by the British which wrecked the strongest fortified positions in the German line.

“After one of these explosions,” said the officer, “I saw the earth rise three hundred feet, resembling a miniature Vesuvius eruption, and on its descent raining rocks, bricks and earth. Following this they came at regular short intervals, seemingly without end.

“In the bombproof we sat counting the intervals, twenty of thirty seconds apart, and wondering whether the next torpedo would fall on the thirteen feet earth roof, which is no protection against 150 pounds of dynamite. Then a crash and concussion, and thirty seconds later a rain of rocks and debris filled the bomb proofs.[…] The air is full of crash, roar, and concussion, and fountains of earth are shooting into the air from the torpedoes and heavy artillery shells. Communications and connections between trenches are destroyed.”

Every snippet I find, leads to me searching, which only increases my knowledge.

There is a tenuous link with Weymouth and Whitehead’s torpedo factory where my father worked during WWII.

They produced the very first torpedo to be tested by Royal Naval Air Service pilot, Gordon Bell, in 1914 from a Short S.64 seaplane.

Whiteheads also opened a factory in France during this early 20th century period, could it be the one featured in the media image producing these finned aerial torpedoes?

For that a bit more research is needed.

Enjoy a bit of good old Weymouth tittle tattle? why not read Nothe Fort & Beyond, full of drama.

Those love and hate relationships between resident soldiers and locals, mayhem, murders and mysteries. Lots of Weymouth and Portland  families mentioned and their dealings with military men (and wives) with their misdeeds.

Available at the Nothe Fort and Weymouth Museum bookshops.